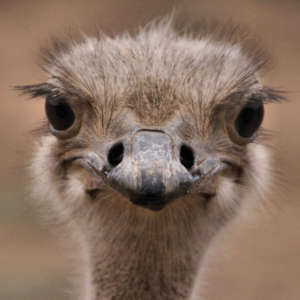 Perhaps the most intimidating creature at Safari West might be the ostrich (Struthio camelus). While birds in general aren’t generally considered particularly frightening, there are exceptions. Surely some of you have had a regrettable pond-side encounter with a swan, or run afoul of a flock of geese. I myself was once ambushed by turkeys while walking home from the grocery store. I lost a half-gallon of milk and twelve perfectly good eggs that day.

Imagine that same tenacity and fierceness in a bird even bigger, stronger, and more confident. Your average ostrich ranges between 6 and 9 feet tall when fully grown, and weighs in excess of 200 pounds. These enormous birds boast incredibly strong legs that can propel that heavy body across the ground at 40 miles per hour. If fleeing doesn’t work, those same legs provide a terrifying defensive tool. One that’s been known to deter or even kill lions.

Luckily for us, though they should certainly be treated with respect, ostriches aren’t all that aggressive. Here at Safari West, our three ostrich ladies are best known for their inquisitive natures, inspecting and pecking at nearly every truck to come through. Enormous and curious in equal measure, these birds are always highlights of a classic safari tour.

Life on the Fringe

Ostriches have long thrived in the more arid expanses of subsaharan Africa. Their ability to survive almost exclusively on the water found in their food makes them well adapted for such an environment. On top of this, the birds will eat just about anything that catches their interest. Though their primary diet consists of grasses and other plants, they will happily munch on bugs, rodents, lizards, and even the occasional small tortoise.

This informal attitude when it comes to food reflects in their mating behavior as well. Males typically try to accumulate a small harem of 5 or so hens, but within this grouping, they only pair-bond with one. This major hen and her male will incubate a nest, but that nest might be made up of some 15 to 60 eggs. Welcome to the amazing world of “dump nesting”. This mixed collection of eggs come from the major hen, the minor hens, and possibly even from other females just passing through the area.

Why so many eggs? Dump nesting behavior seems to follow the “safety in numbers” philosophy of survival. While adult ostriches rarely face predation, baby ostriches have a tougher time. Most won’t make it through their first year. The theory then, is that more chicks in the brood make it more likely yours will survive to adulthood.

The International Union for the Conservation of Nature (IUCN) currently classifies ostriches as a species of Least Concern. Like humans, rats, and dogs, they appear to be doing just fine. That classification fails to take in the whole story however. While the ostrich thrives in many areas of Africa, in the Sahelo-Saharan region of north Africa, populations are in steep decline. This thin band of dry scrubland and sand sits right along the southern border of the vast Sahara desert. It is a tough place to eke out a living at the best of times and unfortunately home to far too many now endangered species*.

Known as the north African or red-necked ostrich (Struthio camelus camelus), the birds from this region look a little different than those at Safari West. Ours have a more blue or gray hue to their skin. Currently science considers the red-necked ostrich a subspecies of ostrich, rather than a different species altogether. Were they to be reclassified as a distinct species, they’d almost certainly be considered endangered. The red-necked ostrich once ranged from coast-to-coast throughout the Sahara and Sahel, from Mauritania to  the Red Sea. These days, the birds survive only in a few isolated pockets.

One such fragmentary population struggles on in southern Niger. Our friends at the Sahara Conservation Fund (SCF) have made this small population the subject of a new and ambitious project. Trendsetters in the world of conservation, SCF focus their efforts not so much on any individual species, but on a specific ecosystem. In this case, the Sahelo-Saharan region of north Africa.

In the last half-century, ostrich in this region have disappeared at an alarming rate, largely due to hunting for meat and feathers. Ostrich also struggle with habitat lost to human development. SCF’s strategy on this conservation front revolves around three principles:

To aid with the breed and release aspect of this strategy, SCF has enlisted the aid of Stephen Gold at the Wildlife Conservation Network. With his expertise and assistance they’ve begun constructing a remote breeding facility made up of shipping containers and a solar array. Self-reliant and suitably rugged, this cutting-edge incubation facility should be online by the next ostrich breeding season.

March of the Ostrich

Critical work like this goes on all across the globe, and we at Safari West try to help as best we can. We don’t breed ostrich, since their overall population remains strong. Instead we keep them so our guests can experience these phenomenal creatures up close and personal. As we teach about the species and their endangered populations in north Africa, we also send conservation dollars to SCF and WCN. This money finances some of the critical work on the ground.

Come visit Safari West to see these majestic animals for yourself. Impressive, amusing, and even a little intimidating, nothing in the world is quite like an ostrich. Learn all about the many phenomenal features that make ostrich so unique, and then consider making a donation to conservation. Whether to SCF, WCN, or directly to our own Safari West Wildlife Foundation, any money you provide helps in the global fight for conservation.

One thought on “All About Ostrich”