Five years ago, the Cassini spacecraft, hard at work studying the planet Saturn and its celestial neighbors, turned its camera back toward home. The resulting snapshot can be seen above. Dramatic, isn’t it?

Astronomers and conservationists don’t find ourselves in conversation all that often. Why would we? Our fields of expertise are literally words apart. We conservationists spend our days focused on the plants, animals, and ecosystems of our terrestrial home. Our astronomer friends meanwhile, spend their time looking up and out, focused very much off world. As it turns out however, we have a lot in common (in fact, even within our own staff, you’ll find several Safari West-ers with a deep love of astronomy). On Earth Day in particular, we find our interests intersecting. On this day more than any other, we conservationists step back and our astronomer friends look down. Together, we focus on the most important thing in our combined universe: our own home planet. 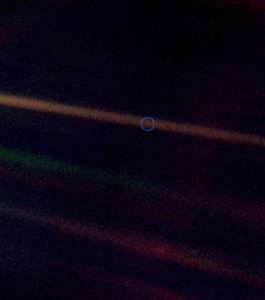 The Cassini photo of the Earth is one of only a few ever taken from beyond orbit. The first and most famous of these planet-wide selfies was taken on Valentine’s Day 1990 by the Voyager 1 spacecraft. At that time, Voyager found itself some 3.7 billion miles from home, soaring beyond the orbit of Neptune and climbing high above the disk of our solar system. As Voyager prepared to power down its cameras, legendary astronomer and author, Carl Sagan made the suggestion that it turn back and take one last photo of home.

The image captured quickly became known as the Pale, Blue Dot. In this iconic photo, our vast globe appears as little more than a faint, blue pixel, floating in a lens flare, surrounded by the vastness of space.

That’s here. That’s home. That’s us. On it, everyone you ever heard of, every human being who ever lived… lived there on a mote of dust, suspended in a sunbeam.

Our planet is a lonely speck in the great enveloping cosmic dark. In our obscurity – in all this vastness – there is no hint that help will come from elsewhere to save us from ourselves. It is up to us… To me, it underscores our responsibility to deal more kindly and compassionately with one another and to preserve and cherish that pale blue dot, the only home we’ve ever known.
-Carl Sagan

As Mr. Sagan so eloquently put it, it’s important to step back and take in the bigger picture. Earth Day provides just such an opportunity. Here at Safari West, we work day in and day out to conserve the wildlife and wild places of this planet and inspire others to do the same. But it’s only too easy to look at something as amazing and exotic as a giraffe or rhino, and think, “what can I possibly do? These creatures come from other nations, other continents. How can one person help?”

We can come together. Here in the United States, we may not slash and burn the rainforests, but we certainly consume the palm oil produced in its place. We may not dine on shark fin soup, but we certainly participate in the over-fishing crisis. None of us is guilty of every environmental sin, but we all have an impact on our world. In a world in which technology brings us ever closer together, our neighbors are not so far away as we might imagine and each of us has the ability to affect change.

This Earth Day, whether you’re celebrating with us at Safari West or not, please take a minute to admire and appreciate the world that gave you life. It’s an incredible planet we live on. One which, to the best of our knowledge, is entirely unique in this amazing universe of ours. Do something today to say thank you to mother Earth. Pick up some trash or take a reusable bag to the grocery store. Take out that old bike and leave the car in the garage. Donate to a conservation organization (The Safari West Wildlife Foundation perhaps? Or maybe one of these?). Above all, celebrate the day. Recognize and appreciate the Earth and this day we’ve set aside for it. Talk about it with your friends and family. Spread the word.

We are tiny people living our lives on a tiny planet, but we’ve made it this far. Let’s come together as a species and fight for the planet we all love so much.