The fans have spoken! Of the semi-finalists (Apollo, Kayode, Obi, Taki, Herbie, and Freckles), Obi won!

Join us in welcoming Obi to our tower of giraffes, and after a month, he finally has a name!

On August 6th, Safari West welcomed a brand new baby giraffe, the 41st one born here on the Sonoma Serengeti. This 6-foot newborn tips the scales at 150 pounds and is ready to meet his fans! There’s just one problem. He needs a name!

Always one of the most famous and recognizable of Africa’s mammals, the lovely giraffe has recently become a conservation issue as well. Although most people still don’t know it, giraffes have sadly found themselves on the Endangered Species List! More than ever before, we need to focus attention on the study and conservation of this unique species. The giraffes at Safari West have served as ambassadors for their species for decades and continue to inspire and educate tens of thousands of human visitors every year. We look forward to this newest arrival continuing the tradition with the next generation of conservationists.

Help us Name that Baby!

If you’ve got a great name for #41, email your suggestion to giraffebaby@safariwest.com by September 3, 2019. On September 3rd we’ll select our five favorite submissions and send them to our friends at the Santa Rosa Press Democrat. The PD team will hold a final vote to pick a winner from the list of five. The winner will be announced on or about September 6, 2019. It that winning name is yours, you’ll receive a gift certificate for a Classic Safari Tour so you can come to meet him in person! Official Rules below.

Show your support for this vulnerable species and spread some love for #41 today by helping us name that baby! 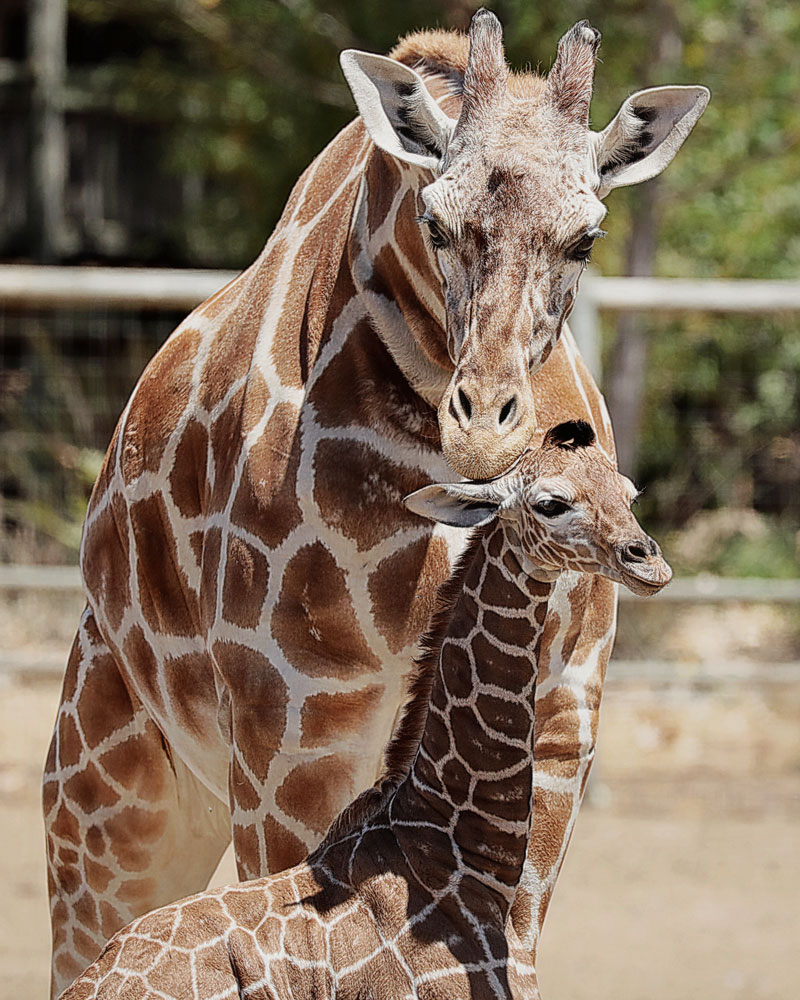 The contest winner will receive a Safari West Gift Certificate for a Safari Tour for Two Adults and two Children.

Judging and Selection of winner:

Acceptance:
Participation constitutes the entrant’s full and unconditional agreement to and acceptance of these official rules. By participating in the contest, the entrant is representing and warranting that he/she has read and understood, and agrees to be bound by, these rules. Including the guides and rules referred to herein, these official rules constitute the entire agreement between the entrant and Safari West in relation to the contest. They govern the entrant’s participation and supersede any prior or other agreements between the entrant and Safari West and relating to the contest. NO PURCHASE OR PAYMENT OF ANY KIND IS NECESSARY TO ENTER OR WIN.

The “Help Us Name Giraffe #41 Contest” is sponsored Safari West (“Sponsor”) This contest is governed by these official rules (“Official Rules”). By participating in the Contest, each entrant agrees to abide by these Official Rules, including all eligibility requirements and understands that the results of the contest, as determined by Sponsor and its agents, are final in all respects. The contest is subject to all federal, state and local laws and regulations and is void where prohibited by law. Sponsor has the right to verify the eligibility of each entrant.

The Contest is open to residents of the United States, who are eighteen (18) years of age or older at the time of entry who have Internet access and a valid e-mail account prior to the beginning of the Contest Period. Sponsor has the right to verify the eligibility of each entrant.

The winner will be announced on or about September 6, 2019 at or about Noon (PST). Announcement and instructions for prize will be sent to the e-mail address supplied on the potential prize winner’s submission. Each entrant is responsible for monitoring his/her e-mail account for prize notification and receipt or other communications related to this contest. If a potential prize winner cannot be reached by Administrator (or Sponsor) within fifteen (15) days, using the contact information provided at the time of entry, or if the prize is returned as undeliverable, that potential prize winner shall forfeit the prize. If a potential winner fails to comply with these official rules, that potential winner will be disqualified. Prizes may not be awarded if an insufficient number of eligible entries are received. If there are duplicate name entries, the time date of the email will be used for duplicate submissions where the first one will be chosen.

Terms, conditions and exclusions may apply. Incidental expenses and all other costs and expenses which are not specifically listed as part of a prize in these Official Rules and which may be associated with the award, acceptance, receipt and use of all or any portion of the awarded prize are solely the responsibility of the respective prize winner. ALL FEDERAL, STATE AND LOCAL TAXES ASSOCIATED WITH THE RECEIPT OR USE OF ANY PRIZE IS SOLELY THE RESPONSIBILITY OF THE WINNER.

The prize is non-transferable. No substitution or cash equivalent of prizes is permitted. Sponsor and its respective parent, affiliate and subsidiary companies, agents, and representatives are not responsible for any typographical or other errors in the offer or administration of the Contest, including, but not limited to, errors in any printing or posting or these Official Rules, the selection and announcement of any winner, or the distribution of any prize. Any attempt to damage the content or operation of this Contest is unlawful and subject to possible legal action by Sponsor. Sponsor reserves the right to terminate, suspend or amend the Contest, without notice, and for any reason, including, without limitation, if Sponsor determines that the Contest cannot be conducted as planned or should a virus, bug, tampering or unauthorized intervention, technical failure or other cause beyond Sponsor’s control corrupt the administration, security, fairness, integrity or proper play of the Contest. In the event any tampering or unauthorized intervention may have occurred, Sponsor reserves the right to void suspect entries at issue. Sponsor and its respective parent, affiliate and subsidiary companies, agents, and representatives, and any telephone network or service providers, are not responsible for incorrect or inaccurate transcription of entry information, or for any human error, technical malfunction, lost or delayed data transmission, omission, interruption, deletion, line failure or malfunction of any telephone network, computer equipment or software, the inability to access any website or online service or any other error, human or otherwise.

INDEMNIFICATION AND LIMITATION OF LIABILITY

By participating, each entrant grants Sponsor permission to use his/her name, likeness or comments for publicity purposes without payment of additional consideration, except where prohibited by law.

This contest is sponsored by:

Any questions regarding this Contest should be directed to the Marketing Team at media@safariwest.com.

His name is Obi!