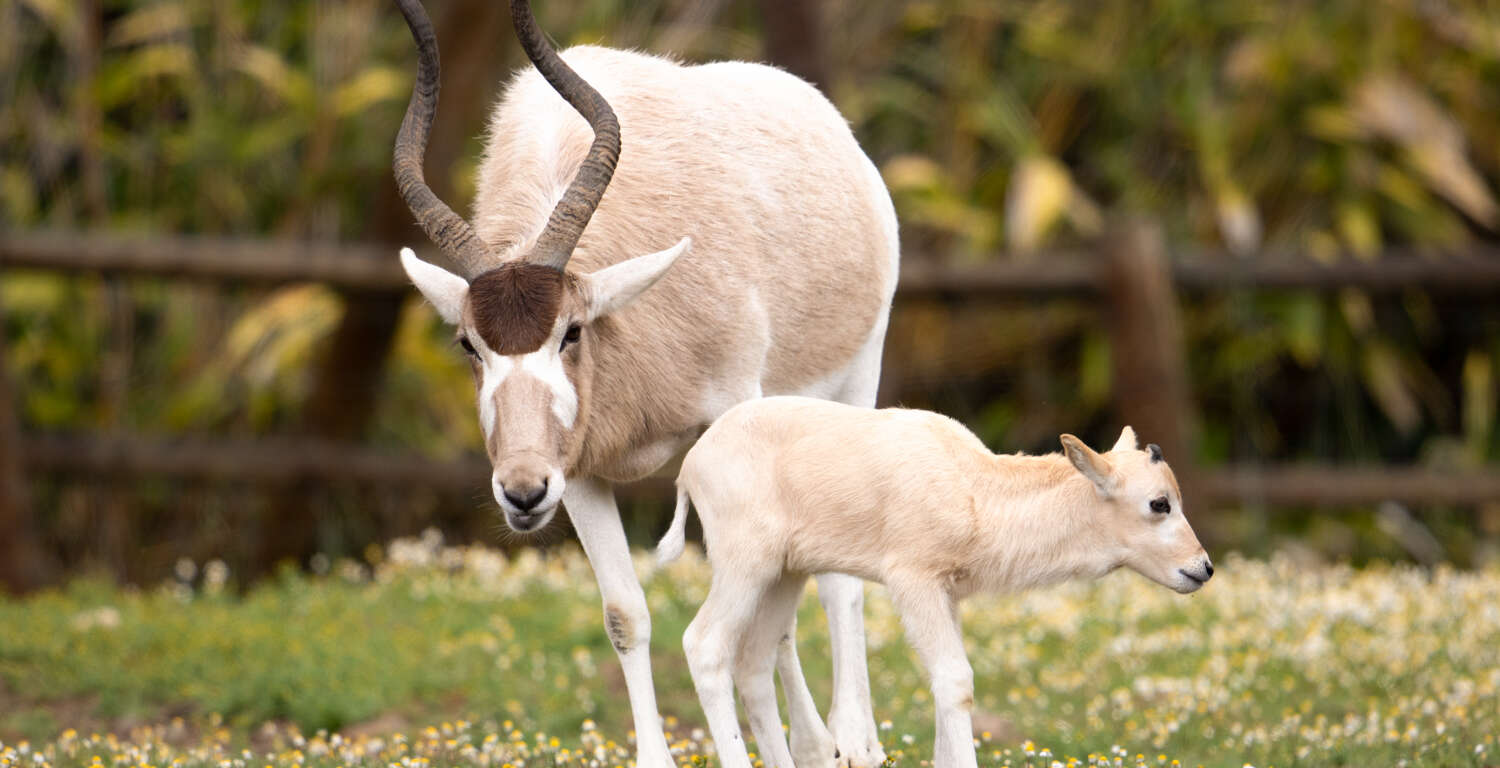 We are excited to announce the birth of 2 new addax antelopes this year! Addaxes have been a part of Safari West since the beginning—our first herd of addaxes arrived here in September of 1992, less than a year before we first started offering tours. It’s no mistake that addaxes have remained an integral part of our collection all these years. An incredible desert survivalist and a critically endangered species, the addax is a fantastic representative of Safari West’s mission: teaching people about the amazing diversity of life on Earth and giving a voice to the conservation of lesser-known species.

The addax’s wild home is one of the harshest and most difficult places to survive in the world: the Sahara desert of North Africa. In the Sahara, daytime temperatures can exceed 115°F, and the average annual rainfall is only about 3 inches. Even in these tough conditions, addaxes have managed to carve out a life for themselves using an amazing array of adaptations. Their white coats help to reflect sunlight and keep them a little bit cooler, and splayed, flat hooves help them to walk across the sandy desert. But their most incredible adaptations lie in their ability to regulate water loss and control the temperature of their brain.

Addax are considered to be nearly water independent, meaning that theoretically, an addax could go almost its entire life without drinking water from a standing source. Under human care, addaxes will happily drink any water they are given, but in the wild, they are able to get by almost completely on the moisture found inside of the small bites of vegetation they find in the desert. This means extremely efficient kidneys and intestines and very concentrated, infrequent urination.

It is easy for a mammal’s brain to overheat in a place as hot as the Sahara. To help with this, the horns of an addax act as radiators, with blood flowing up through the spongy bone core where heat can dissipate before the blood returns to the brain. Addaxes also have a structure of veins and arteries at the base of their skull called a carotid rete, which allows for countercurrent heat exchange. As warm blood flowing towards the brain is cooled by cooler blood flowing away from the brain, addaxes are able to keep their head and the rest of their bodies at two different temperatures! This may both reduce the risk of brain damage from their brain overheating and reduce the water loss through sweating and panting that would occur if their body temperature was lower. 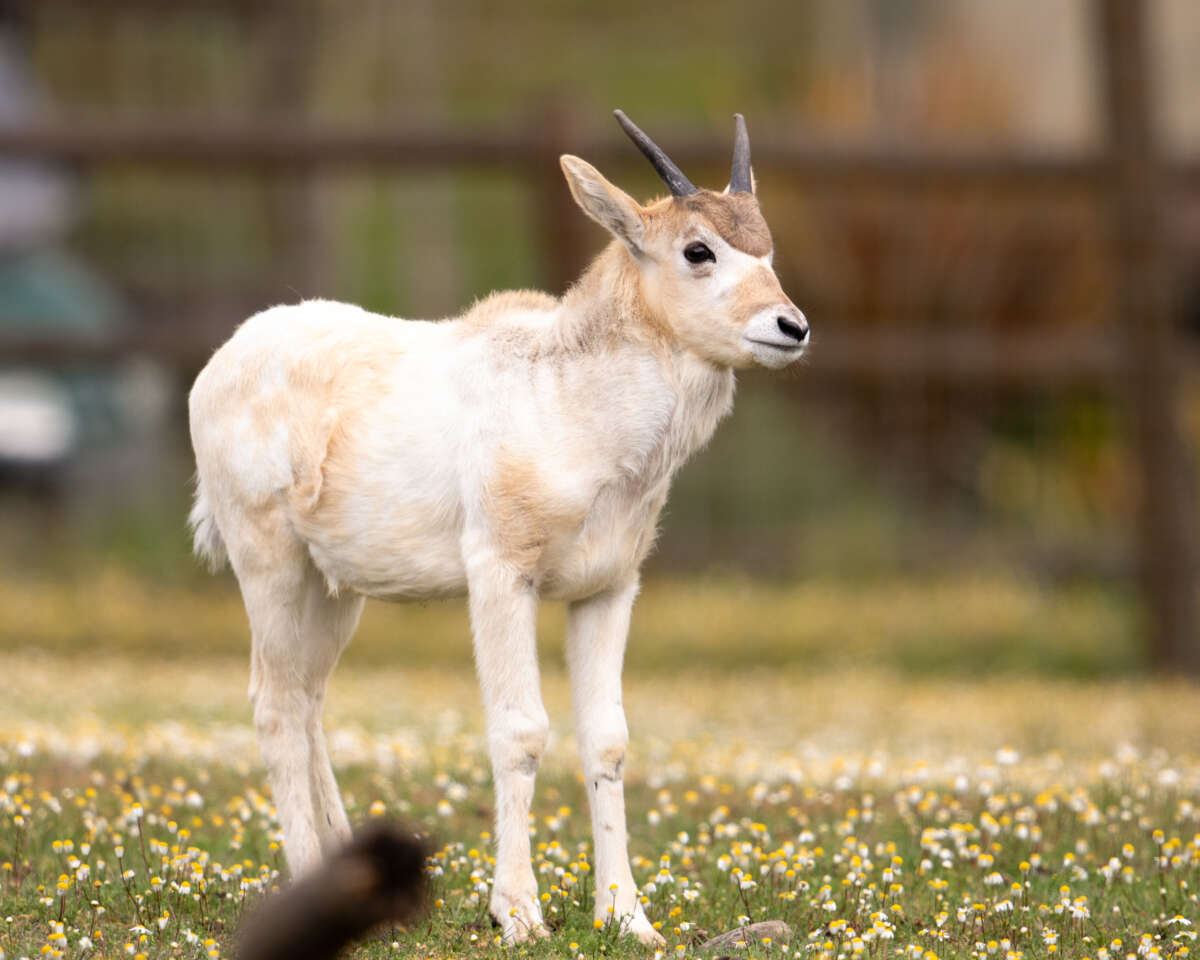 The Edge of Extinction

Even with all of these incredible adaptations, addaxes are struggling to survive in the wild. They live on a knife’s edge of survival, so any extra stress—from habitat loss, hunting, and disturbance related to oil exploration—can push them over the edge. The central Sahara is an extremely difficult place to survey and conduct fieldwork so it is hard to get a complete picture of wild addax population numbers, but surveys in 2015 and 2016 only found 3 addaxes, as well as track-based evidence of ~25 more individuals. The International Union for the Conservation of Nature (IUCN) has classified the addax as critically endangered since 2000, but these surveys revealed that without swift action, wild addax populations would soon be lost completely.

Luckily, addaxes seem to do quite well under human care—there are currently ~2000 – 3000 addaxes in zoos and conservation facilities across the world. Government organizations from Chad and Niger, as well as the Sahara Conservation Fund, IUCN, and a vast network of other conservation agencies have partnered together in an effort to bring the addax back from the edge of extinction. A regional action plan has been created, with the priorities of preventing further loss of wild addax by protecting key habitat areas, assisting local communities in engaging with conservation efforts, and reintroducing groups of addax that are under human care back into the wild.

The fight is far from over, but all of this effort has resulted in successes for the addax! In late 2019 and early 2020, the first groups of about 40 addaxes previously under human care were released into the wild in central Chad. In the following 2 years a few more small herds have been released, and as of early 2022 there is a population of about 75 reintroduced addax in the deserts of North Africa. In July of 2020, 2 reintroduced females gave birth to the first 2 wild-born Addax calves of this new population, giving a much needed glimmer of hope for the success of this project and for the continued survival of this species. 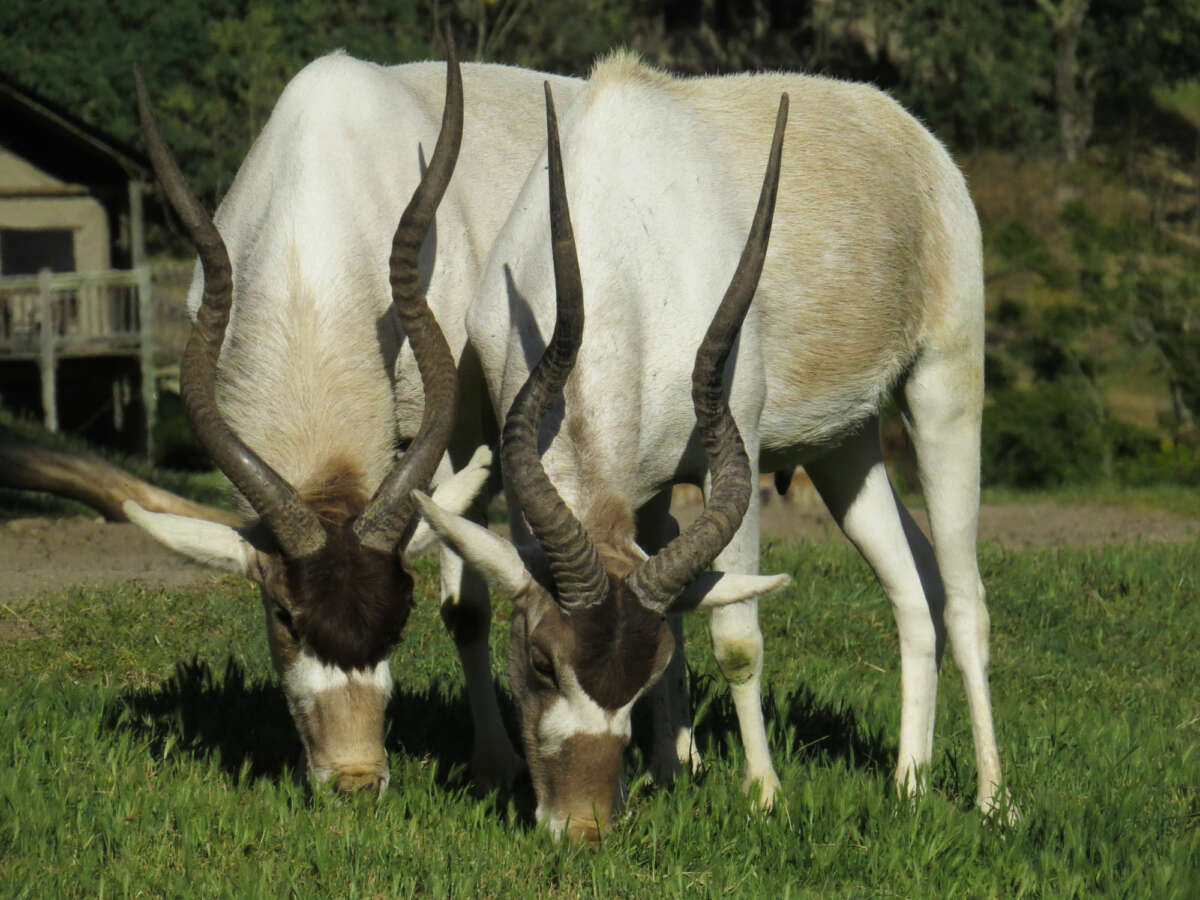 We are thrilled that the success of addax births in Chad is in some small way mirrored by 2 new addaxes here at Safari West. Our 2 youngsters spent much of the first few weeks of their lives stashed in a safe corner of their habitat by their mother, a strategy meant to keep them safe from both predators and the heat in the wild. They have since moved towards behavior similar to crècheing, or nursery-like care where adults take turns with the temporary responsibility of their young.

It has been a joy to watch these young addaxes play with each other and explore their world more and more each day. While it can be sad to think about how low addax populations have dropped in the wild, getting to show our guests a new generation of addaxes strengthens our beliefs in two ways. First, it reaffirms the importance of zoos as ambassadors, educating the public about incredible animals that need our help. And second, it reminds us that without the refuge of human care, there is a chance that those 3 addaxes spotted in an aerial survey of the Sahara in 2016 could have been the last 3 addaxes in the world.

If you would like to learn more or donate towards the fight for addax and other endangered North African species, the Sahara Conservation Fund is doing amazing work. You can find them at:

All photos by Mark Pressler