Conservation Dinner Series: Norman Gershenz of SaveNature.Org joins us in the elephant room after dinner to give a talk about bugs. There will be live bugs! The conservation dinner series is complimentary to all dinner guests. 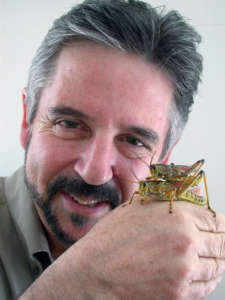 Bio for Norman Gershenz
Norman Gershenz is the CEO and co-founder of SaveNature.Org and director of the Insect Discovery Lab. SaveNature.Org has raised more than $4.7 million to help preserve thousands of acres of rainforest, coral reef and desert habitat around the world. Norm created and developed the first Adopt An Acre program in the United States as well as the award-winning Conservation Parking Meter; both raise funds for international conservation. SaveNature.Org’s work has been highlighted in National Geographic, Time Magazine, and ABC’s World News Tonight.

Norm was affiliated with the San Francisco Zoo for more than 18 years as an educator, member of the animal care staff, fundraiser, and researcher. Norm has tracked black rhinos in Zimbabwe, chased orangutans in Borneo, and stalked the elusive platypus in Australia. He has handled boas and bobcats, pandas and elephants, snow leopards and koalas, hippos and hornbills. He has worked as a field biologist and naturalist in Borneo, Malaysia, India, Nepal, Costa Rica and Namibia.

In 2010 Norm was awarded the prestigious Elizabeth Terwilliger Prize for conservation. In 2015 Norm created Smiles of Hope, a new Nature Assisted Therapy program for hospitalized children.

Norm is also a noted gourmet insect chef, a lecturer in biology, an expert birder AND can spot a beetle at 50 mph.

Thanksgiving on the Sonoma Serengeti – Sold Out