Conservation Dinner Series: David McGuire of Shark Stewards joins us in the elephant room after dinner to give a talk about sharks. The conservation dinner series is complimentary to all dinner guests. 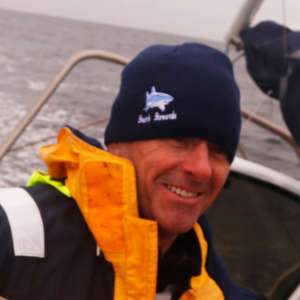 David McGuire is the founder and director of the Ocean Health and Shark Conservation non-profit Shark Stewards. As a Research Associate of the Department of Aquatic Biology at the California Academy of Sciences, David is conducting a shark research program that includes population studies, movements and fisheries impacts. A Captain, Dive Master and filmmaker, David explores the world ocean on numerous sailing voyages producing media with an emphasis on ocean awareness. Educated in Marine Biology, he holds a master’s degree in Environmental Health, has worked in education and public health at the University of California at Berkeley and is an adjunct professor at the University of San Francisco in the Department of Environmental Science.

His advocacy catalyzed the coalition leading to the passage of the California Shark Conservation Act (Fong, Huffman) in the State of California, the Shark Conservation Act, AB 376. Since then Shark Stewards has worked in shark fin regulations in 10 US states and currently is supporting a US law to eliminate the trade of shark fins in the United States. As a documentarian and diver, he has conducted expeditions with California Academy researchers communicating the wonders of the natural world and ocean life and the need to protect them, including a two-month expedition to the Philippines where he collected and filmed for the Academy. Shark Stewards has catalyzed an alliance in Malaysian Borneo to reduce shark fishing and the shark fin trade and create marine protected areas in the Coral Triangle and develop ocean media to educate and advocate marine protection. Active in the California Marine Protected Areas and local National Marine Sanctuaries, he co-chairs the Golden Gate MPA Collaborative effort communicating the science and regulations of MPAs and facilitating compliance.

David is the writer, producer and underwater cinematographer of several award-winning documentaries focusing on sharks. He has also published numerous articles on the state of the ocean and sharks and writes a National Geographic blog called Ocean Views on sharks and ocean health that is published on several online outlets. David is also an author of numerous articles and fiction and non-fiction books including Surviving the Shark. He sits on several boards of non-profits including The San Francisco Ocean Film Festival, the Green Film Festival and the Cordell Bank Marine Sanctuary Association. He has received numerous awards for his work including an award for Journalism with KQED for the investigative story Sea Horse Sleuth, the 2011 Hero of Marin Environmental Stewardship Award, and an Emmy award for his work on the documentary Reefs to Rainforests.

David has been recognized by Congressman Jared Huffman for his work introducing the successful California Shark Fin Trade Ban and was awarded the Hero of Marin Award for that work. He has also been recognized as a Hero of the Environment by the Town of Pacifica for his educational and ocean conservation work. An ocean adventurer and athlete, David is an open water marathon swimmer, swimming for sharks. His current work includes an online film series called Borneo From Below and a book Surfing with Sharks.