Conservation Dinner Series: Rodney Jackson of Snow Leopard Conservancy joins us in the elephant room after dinner to give a talk about Snow Leopards, Herders and Mountain Landscapes. The conservation dinner series is complimentary to all dinner guests. 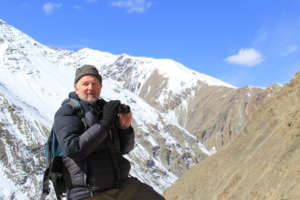 Dr. Rodney Jackson, Founder-Director of the Snow Leopard Conservancy, is recognized as the world’s leading expert on snow leopards. He has selflessly devoted 40 years to saving these iconic, elusive, mountain cats. He is driven by deep passion and conviction that snow leopards, and the indigenous people who must live with them, deserve and need our help.

Upon receiving a 1981 Rolex Award for Enterprise, Rodney launched a pioneering radio-tracking study of snow leopards in the remote mountains of the Nepalese Himalaya. The four-year study led to the cover story in the June 1986 National Geographic. It was during this study that Rodney realized the crucial role of communities in the long-term survival of snow leopards.

Rodney has been a four-time finalist for the Indianapolis Prize, the world’s largest individual monetary award for animal conservation, and is a nominee for the 2018 prize.

Rodney pioneered camera-trapping techniques and ensured that local high school students and livestock herders could participate in wildlife monitoring using these cameras as well as by collecting scats according to a scientific protocol for genetic analysis.

In much of Central Asia, the snow leopard is a totem animal for indigenous cultures. Rodney is a technical advisor to the Global Snow Leopard & Ecosystem Protection Program (GSLEP), an international body of snow leopard range country environmental Ministers and relevant NGOs. He has provided input critical to its goal of protecting 20 snow leopard landscapes by the year 2020. But equally important, as part of the GSLEP process, Rodney has led the way in ensuring that Indigenous Cultural Practitioners (Shamans, Sacred Site Guardians, Revered Elders, etc.) have pathways to meaningful participation in planning for conservation of snow leopards—planning that is usually top-down Western science-oriented.

Rodney prepared the snow leopard section of the IUCN-World Conservation Union’s Status Survey and Conservation Action Plan for Cats, which serves as a definitive document on the needs and opportunities for preservation of the earth’s remaining wild cats. He currently sits on the IUCN’s Cat Specialist Core Group and served from 2003 until 2008 on the Snow Leopard Network Steering Committee. Rodney led the standardization of snow leopard field survey methods across the twelve snow leopard host countries. Working with partner agencies, he trained biologists in these methods in nature reserves in China, Pakistan, Mongolia, Nepal, Bhutan, and India. Rodney wrote a comprehensive handbook on surveying snow leopard populations using camera traps, published in 2006 and translated into Chinese and Russian.  Among his numerous scientific writings, Rodney was a major contributor to the book, Snow Leopards, published by Elsevier Press in 2016. It’s the first in a series, “Biodiversity of the World: Conservation from Genes to Landscapes.” Rodney was the lead author on the chapter, The Role of Mountain Communities in Snow Leopard Conservation.