Our Gates are Temporarily Closed due to COVID-19, but our Hearts are still Open. Read More

Conservation Dinner Series: Bill Leikam “The Fox Guy” of Urban Wildlife Research Project joins us in the elephant room after dinner to give a talk about grey foxes. The conservation dinner series is complimentary to all dinner guests. If you’d do not have a dinner reservation and would like to join, please book here. 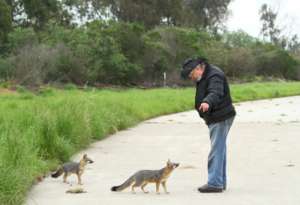 Science has been a fundamental part of Bill’s life starting when he was just a teenager. In the 1970s, he conducted original research into the nature of consciousness that led to being a member in 1981 as one of an 18 member Scientific Delegation to the People’s Republic of China where he presented his research on alternate modes of healing. During the 1980s, he spoke at conferences across the country both on consciousness and the psychology and neurophysiology of boredom.

As of 2018, nine years ago, Bill began documenting, photographing and studying the behavior of the gray fox, something that has never before been done in such a comprehensive way. This study resulted in the development of the Urban Wildlife Research Project. He introduced his work to videographer and naturalist Greg Kerekes and welcomed him on board to join in with the research. They are dedicated to developing viable habitat and connectivity corridors for the gray fox and other wildlife living to the east of Highway 101 and the shore of the San Francisco Bay. Their work has attracted a good deal of attention by the press. They give highly acclaimed presentations about their work to corporate, private, and an array of wildlife organizations. Bill is also known as the Fox Guy.

Organizations with which we are involved and have partnered with:

Additionally, Bill is an associate board member of the Guadalupe – Coyote Resource Conservation District (GCRCD) that covers a very large section of the Diablo Mountain Range on the eastern side of Silicon Valley and the Santa Cruz Mountains on the western side of the valley.

The GCRCD is involved in habitat development, creek and river restoration, salmon and steelhead protection, watershed issues throughout the GCRCD’s jurisdiction, planning with biodiversity at the center of all projects, working with farmers and ranchers to improve practices, protection of endangered species is just the overview of their work.

Bill aka the Fox Guy said, “I grew up on the banks of the Corralitos Creek, a wild creek flowing from the Santa Cruz Mountains, down the western slopes, and through our backyard. This initiated my love of creeks, fish, wildlife, and the pace, the rhythm of the seasons.”